In December last year, I got a chance to visit my friend Omar in Alexandria, Egypt. I had been looking forward to this ten-day trip for a long time, primarily because I had never visited a friend from university in their home country. The tentative plan was to spend half of my time in Alexandria, stay in Cairo for two days and possibly backpack to a city in Upper Egypt, which ended up being Luxor, before flying out of Cairo.

In Alex with Omar

After my long flight to Cairo, I got on a cab for a three-hour drive to Alexandria. My driver was a middle-aged man and as we snailed through the town, he cracked me up with his digs at people on the road. I reciprocated his enthusiasm and we began talking about random topics, including his interest in women. He even taught me some (barely useful) Arabic words and introduced me to the Egyptian singer Yousra’s famous song 3 daqat. Who knew I would play this song on loop for the following week. Once we got on the highway, I excused myself and dozed off for a solid hour or two.

In Alex, Omar and his mother welcomed me with tasty falafel and other Egyptian specialties. Even though I had seen him at Bucknell only four days prior, we stayed up until 2:30 am, chatting and discussing plans for the upcoming days. My time there was marked by comfort and good conversations with his friends and family. His family ensured that I had everything needed to get a true Egyptian experience. This evidently includes drinking shai (tea) after each meal; I believe I drank more tea in those ten days in Egypt than I did in the entirety of 2018.

I tried two things which I could not have, had I not been with an Egyptian. On my third day, Omar took me to his newly-wed aunt’s house for dinner. After a filling meal, and obviously shai, all of us sat around a table and watched parts of his aunt’s three-hour long wedding video. I had no idea what to expect but the wedding, especially the dancing, did not disappoint. While everyone commented in Arabic on the antics of Egyptian weddings, I amused myself by guessing what they meant. Omar chimed in with translations occasionally.

On another night, he and I also went to meet his friends at an ahwa, Arabic for coffee and coffeehouse alike. This open-air shop was beside an intersection and for an unknown reason, its ambiance reminded me of my hometown. Many go there to relax after a long day, watch football and smoke hookah with their friends. It was at this place that I felt the most Egyptian during my whole trip. I did of course visit a few tourist sites such as the Library of Alexandria and the Catacombs of Kom El Shoqafa. If you are short on time, a walk (and perhaps a seaside brunch) along the Corniche is enough to admire the beauty of this city.

Mediterranean Sea from behind Citadel of Qaitbay

Here, I compile a list of must-try food and drinks in Egypt. 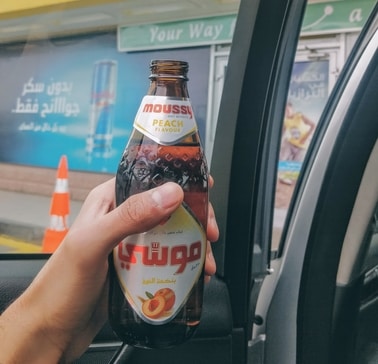 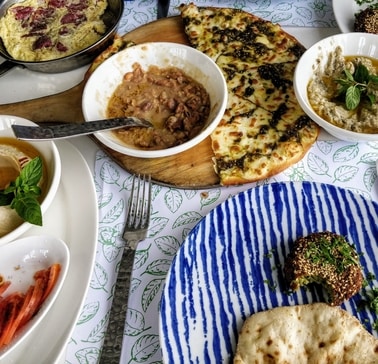 CouchSurfing is a service which connects travelers to hosts offering their couches for people to crash (or surf) on. I had enjoyed my first experience surfing in Europe earlier in the year, so I decided to give it another go. Unfortunately, the CouchSurfing community in Egypt is still in its infancy. A day prior to leaving Alexandria for Cairo, I started actively looking for hosts in Luxor. Ashraf’s profile and stellar references piqued my interest, so I wrote to him, bribing him with my usual “I come bearing delicious sweets” opener (credits). Soon thereafter, he accepted my request to stay, and boy, am I glad he did?

Luxor is a popular tourist destination as the city boasts of one-third of all of world’s ancient monuments. The river Nile splits the city into two halves - east and west banks. I arrived at Luxor train station on the east bank quite early in the morning, around 7 am. Ashraf, being the kind person he is, offered to pick me up on his Bajaj motorcycle and we rode to his house, too leisurely to my liking, on a road seemingly familiar to my Indian self.

For the following two days, he and his family went to great lengths to make my stay at their humble place as comfortable as possible. Ashraf and his brother drove me to distant sites, such as the Valley of the Kings, and linked me to their tour guide friends who in turn provided me discounted rates for a donkey ride and a fancy motorboat cruise on the Nile.

Ashraf’s family is undeniably one of the most open-minded and well-educated families I have had the fortune of meeting. They garden a host of fruits and vegetables, raise farm animals and even bake their own bread in a clay oven. Only his mother does not speak proper English, so while I was there, we would communicate through Google Translate and some remarkable sign language. Her Egyptian hospitality was truly heartwarming and I hope I can return the favor someday.

Whenever I go to a new place, I often look for ways to spend time with locals. It does not always work out the way I would hope, like the time I found myself in a pub in Cairo filled with old Egyptian men, chit-chatting, smoking cigarettes and snacking on olives. Anyway, as I was looking for a host in Luxor, a few people wrote to me proposing to meet. I was fairly skeptical about this, so without sharing many personal details, I arranged to meet two of them on separate days in public areas.

My first meeting lasted a shade under an hour; he was a tour guide, so we discussed his passion for ancient Egyptian culture as I sipped on Turkish coffee. But the following afternoon, after visiting the magnificent Karnak Temple, I met a guy named Shehab with whom I ended up spending the rest of my day. We met near the railway station and walked for ten minutes on busy roads with no footpath to arrive at a cafe he owns. I challenged him to a game of Taula (Egyptian backgammon) which Omar had recently taught me the basics of. To my surprise, I remembered a few tactics but he still managed to edge me out. I drank Lipton for consolation.

We soon left the cafe, took a microbus back to the station and began wandering. Although Shehab had no obligation to accompany me anywhere, he was keen on helping me discover Luxor. We visited the famous Oum Koulsoum cafe named after an Egyptian singer and a souq (market) near Luxor Temple to buy souvenirs. His generosity and willingness to help really touched my ♡ and we celebrated our newfound friendship on a sunset ride on the Nile.

I spent one and a half days in Cairo on either side of my short trip to Luxor. Egypt’s capital Cairo is a metropolitan city boasting almost 20 million people. Similar to New Delhi, the city is chaotic and its traffic insane. I had some annoying experiences there, most of them only aggravated by my sickness due to lack of sleep. Below, I mention two of them.

Two words: bad idea. When I travel alone, I stay in hostels to save money and hang out with other travelers. This time around, I booked a hostel in downtown Cairo in hopes that I would be closer to sites I wanted to visit. Turns out, you can only really visit these sites if you have the energy to move around. Who knew?

Cairo is unbelievably noisy and I made a mistake by staying in downtown. I distinctly remember being unable to sleep and waking up every other hour, cursing in Hindi and questioning why the cars outside would not stop honking. In hindsight, I should have at least carried a pair of noise-canceling earbuds. The following day, after a long tour to the pyramids, I mustered up my strength to walk for ten minutes to the Egyptian Museum. After what seemed like a million security checks, I eventually entered and got to see the gorgeous golden mask of King Tut. Just like that, everything was fine again.

It’s a lie. I was almost dead and I barely made it to my train to Luxor(#luxor).

A first trip to Egypt is certainly incomplete without visiting the pyramids. Just before leaving Alexandria, I had booked a full-day tour to the pyramids on TripAdvisor. On my first morning in Cairo, I was picked up by my tour guide who offered me a ful sandwich. We made small talk, talked about his Egyptology studies and he soon sold me on how cool ancient Egyptians were. On a couple of occasions, I felt as though he was not being genuine, like when he pretended to know Omar’s father. But overall, the tour was worth the value and I even got a camel ride out of it.

What I found frustrating about this tour, and wherever I traveled alone, was Egypt’s overwhelming tipping culture. Tourism drives a big part of the economy and the country has done well to regain tourist confidence after the Arab Spring of 2011. Tips can make up for a sizable proportion of one’s earnings, and it’s fair to expect a tip for good service. Yet sometimes people would walk up to me out of nowhere and try to convince me that their unwanted company and suggestions are worth a tip. I think I may have avoided other such interactions because I do not look exceptionally foreign. 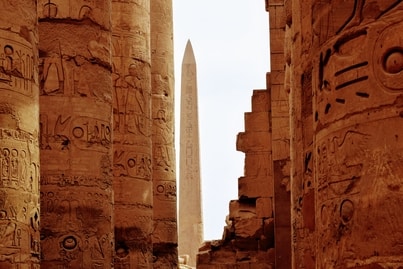 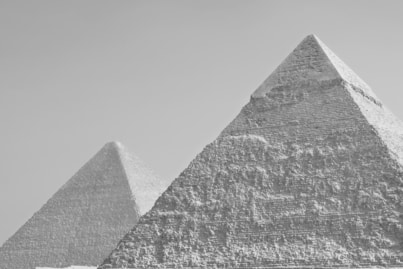 Karnak Temple and the Great Pyramid of Giza

Due to unforeseen albeit stupid circumstances, I had to travel with a backpack a third of the size of my usual backpack. Traveling solo in Egypt with a tiny bag presented strange challenges. On a freezing bus from Luxor to Cairo, I was forced to put on a dirty pair of crew socks just to keep myself warm. Ew? Well, now I know the importance of carrying a backup pair of crew socks. Requesting a ride on an Uber alternative also proved to be a struggle due to the language barrier.

As much as I disliked a few bits of Cairo, I welcome unknown situations so as to build confidence and prove to myself that I can handle them. And without the solo leg of my trip, I could not have done that.